Tidal Power is the extraction of energy from tidal  currents, flows and streams to produce electricity.  These primarily result from the gravitational effects of the sun and the moon on the Earth’s oceans.  These effects cause the rise and the fall of the ocean which then cause currents by interacting with a variety of shoreline shapes and sea floor contours. While the oceans present challenging environments in which to work, tidal power meets these challenges to achieve some important advantages over other renewable sources of energy.

Tidal power can be extremely variable over a short time frame, typically peaking  twice per day, but is very predictable over long periods of time.   The tidal cycles usually include the following phenomenon:
The sea level rises over several hours, covering the intertidal zone.  The water rises to its highest level, reaching high tide. The sea level falls over several hours, revealing the intertidal zone. The water stops falling, reaching low tide.

Tidal power is a denser form of energy than either wind or solar power.  Seawater is 832 times as dense as air and is not compressible.  This means that more power is available per square meter in tidal currents than for wind or solar. Like wind, tidal power is a function of the velocity of the current flow cubed.  As tidal flows peak, the power extracted increases geometrically.  This energy density is further leveraged by the massive size of the ocean and the scale of the currents produced with the change of the tides.

Although Norway has lower tidal water waves, the world’s strongest maelstrom is in the Saltstraumen in the northern part of Norway. This is because so much water from the estuary moves through a small passage. TideTecs concept is based on creating the same effect as in the famous Saltstraumen by focusing the water through turbines in a barrage. A number of locations in Norway are suitable, especially when the barrier is being built for road-purpose anyway and therefore pays most of the cost.

There are three main concepts for converting tidal energy to electricity: 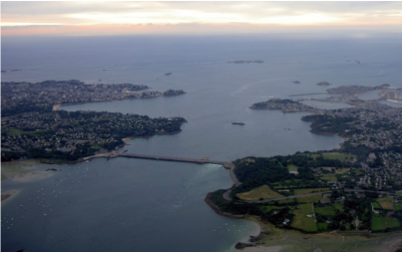 A barrage or dam is typically used to convert tidal energy into electricity by forcing the water through turbines, activating a generator. Gates and turbines are installed along the dam. When the tides produce an adequate difference in the level of the water on opposite sides of the dam, the gates are opened. The water then flows through the turbines. The turbines turn an electric generator to produce electricity. La Rance and Shiwa Lake Tidal Power Plants are the most famous examples. The TideTec concept uses this method.

Can also be in combination with flood-defence. The TideTec concept uses this method. 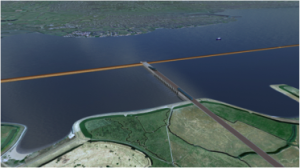 Tidal turbines look like underwater wind turbines. They are arrayed underwater in rows, as in some wind farms. The turbines function best where coastal currents run at between 3.6 and 4.9 knots (4 and 5.5 mph). In currents of that speed, a 15-meter (49.2-feet) diameter tidal turbine can generate as much energy as a 60-meter (197-feet) diameter wind turbine. Ideal locations for tidal turbine farms are close to shore in water depths of 20–30 meters. 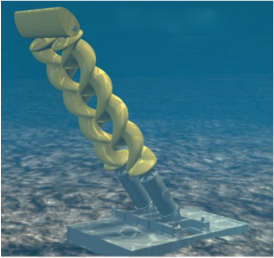 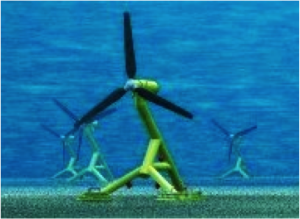 Other tidal projects around the world (not TideTec initiated):

England: The Wash  TideTec, The Wash barrier company and others plan to make an application for a Eurostar pilot-project to verify the possibilities for a Tidal Power Plant producing more than 4TWH annually and also serve as flood protection.